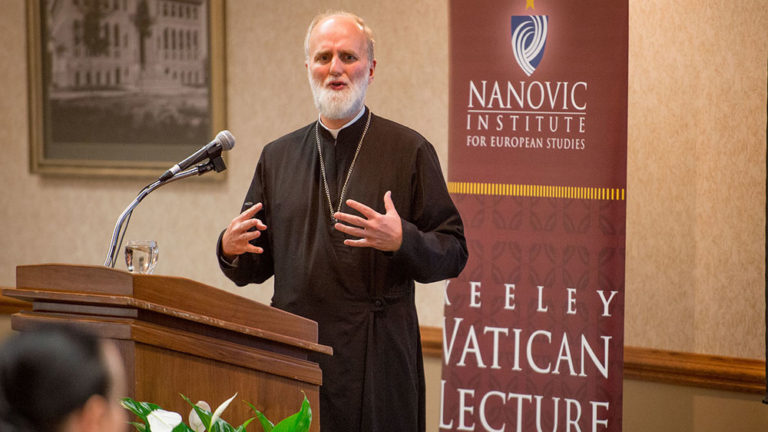 Archbishop Borys Gudziak will be presented with the Notre Dame Award in a ceremony June 29 in the western Ukrainian city of Lviv, University President Rev. John I. Jenkins, C.S.C., announced Monday (May 6).

“In the face of innumerable challenges, Archbishop Gudziak has made the Ukrainian Catholic University a center for cultural thought, Christian witness and the formation of a Ukrainian society based on human dignity,” Father Jenkins said. “At the same time, he has steadfastly provided dedicated pastoral guidance to members of the Ukrainian Catholic Church. It will be an honor to recognize his courageous and faithful service when we visit Ukraine in June.”

Previous recipients of the Notre Dame Award have included President and Mrs. Jimmy Carter of the United States; St. Mother Teresa of Calcutta; John Hume of Northern Ireland; Cardinal Vinko Puljić, archbishop of Sarajevo, Bosnia and Herzegovina; L’Arche community founder Jean Vanier of Trosly-Breuil, France; and most recently, the Colectivo Solecito de Veracruz, a group of Mexican mothers organized to search for their missing loved ones in the face of criminal violence and state complacency.

This is the first time the award is being conferred on someone of Ukrainian descent.

The Notre Dame Award is presented to “men and women whose life and deeds have shown exemplary dedication to the ideals for which the University stands: faith, inquiry, education, justice, public service, peace and care for the most vulnerable.”